I have never been a fan of boxed macaroni & cheese.  Sorry Kraft.  Even as a kid I tried to avoid the stuff at all costs. Something about powdered processed cheese doesn’t set well with me. Does this make me un-American or something?   Well, now I’m feeling a bit so.

By the way, fun fact. Did you know that Kraft Mac & Cheese original was first produced in 1937? Well it was, just prior to the start of World War II.

Okay, let’s get out of the WWII era and step into the future.  Quite a few years ago I went to (clearing my throat and putting my sunglasses on for disguise) a psychic party.  Aside from conjuring up spirits at the dining room table, the hostess served lunch at it too.  And honestly, I can’t remember anything else we had to eat that day except this mac & cheese. 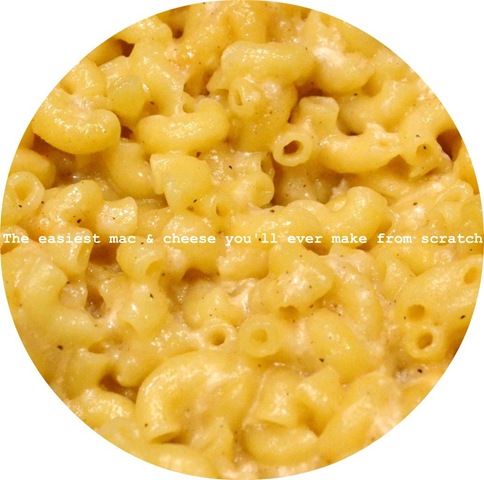 Up and to that point, I had always made mac & cheese with a white sauce.  As you know, it can be time-consuming after a long day at work, or when you would rather be spending your time doing something else.

With this recipe, you just dump everything in a large oven-safe bowl.  Yes, you read correctly.  It’s so easy it almost feels wrong. Is it a sin not to make mac & cheese with a white sauce?

I still make both recipes from time to time, but the last time I made this recipe, I decided to conduct an opinion poll at the dinner table. I needed to know what the consensus was. The questions were simple. Do you like this easy to make, no fuss, mac & cheese the best? Or, do you like the mac & cheese I make with white sauce better? The answer was unanimous. Everyone liked this recipe better.

I suppose “the proof of the pudding is in the eating” because when we were putting leftovers away after dinner there was only a tiny scoop left.  This was after making double batch and feeding six people.

Spray a large oven-safe bowl with non-stick cooking spray.  Put all of the ingredients into the bowl.  Cover with aluminum foil and bake for about 45 minutes; stir about halfway through the baking.

After the 45 minutes, remove aluminum foil and stir again.  Bake for additional 15 minutes, or until macaroni is tender.

*Double the recipe to serve a larger crowd. I have made it both ways with no problems.

And that’s it; so cheesy, delicious, no white sauce to make, and no fuss!

I wonder why the psychic didn’t tell me she saw a lot of this mac & cheese in my future?