Many years ago someone gave me a bag of Amish Friendship Bread (AFB) starter mix.  If you aren’t familiar with this mix, it’s a yeast based dough (sourdough) that requires your attention nearly everyday.   I really don’t want to rewrite Amish Bread history so I am going to refer you to an awesome blog that I found called Friendship Bread Kitchen.  Darien Gee is the mastermind behind the Friendship Bread Kitchen, and it appears that Darien is an expert on AFB.  She’s published a series of books called The Friendship Bread Novels, and her blog hosts over 250 AFB recipes. 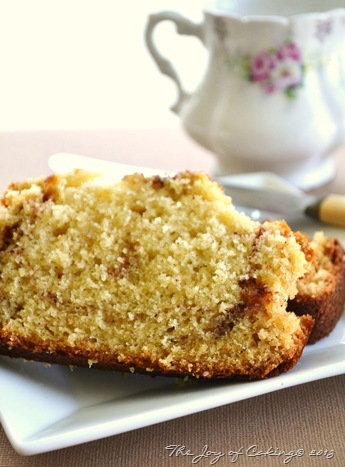 Since I really like AFB, and I didn’t (and still don’t) have a starter mix of AFB on hand, I decided to do the next best thing –  look for a faux recipe for it.  I found a delicious looking (alternative) recipe for AFB posted by Melissa at Redfly Creations.  Melissa was given the recipe from a lady who claimed her husband had been eating it for breakfast for the last twenty years.  Melissa’s photos of the bread were the deciding factor that I would give faux AFB a chance. 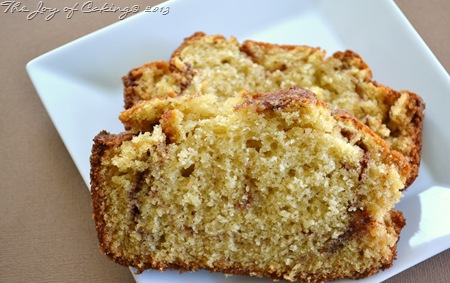 This recipe is slightly adapted from Redfly Creations.  I cut the recipe in half, added 1/4 tsp. of cinnamon to the batter, along with a tsp. of vanilla extract.  I also lowered the oven heat to 325 degrees because my oven tends to run a little hot.

Grease a bread pan with non-stick cooking spray.  Preheat oven to 325 degrees.  In a small bowl mix 1/4 c. of sugar and 1 tsp. of cinnamon together; set aside.

In a large bowl, mix together butter, sugar, and egg.  Add milk, flour, and baking soda. Pour about 1/2 of  the batter into the greased pan and sprinkle half of the prepared cinnamon and sugar on top of batter.  Add remaining batter to pan and sprinkle with last of cinnamon mixture on top. Bake for about 45-50 minutes, or until toothpick tester come clean.

Cool in pan before removing and slicing. 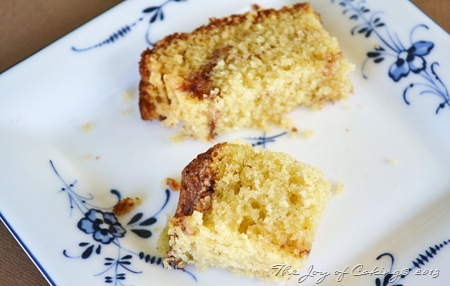 This Cinnamon Bread is so sweet, moist, and delicious.   And while I’d say there are some subtle differences between this recipe and the real AFB,  I’d say it’s a tasty alternative.

Have you ever made AFB? 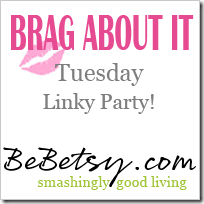