You see, each year I have told myself that this is the year I’m going to make Homemade Butternut Squash Soup.  But then I never do make the soup and there has never been a good reason for it either.  Just lame excuses.

This year, I finally kept my word to myself and made the most delicious and healthy soup imaginable.  I now realize that all that procrastination was crazy.  The most time consuming part of making this soup is the peeling and cubing of the squash – which I enlisted my hubby to help me with.  If you want to speed this soup making process up a bit then I suggest purchasing the squash already peeled and cubed from the vegetable section of your favorite supermarket.

This soup recipe fits my tastes and expectations perfectly.  There was no disappointments and I’m adding it to my tried-and-true recipes in hopes that I’ll make it for many more years to come.  If you try this recipe please let me know what you think of it.

In a large pot, melt butter and oil on low heat.  Add onions and cook until tender.  Once onions are cooked, add carrots, squash, and broth.  Cover; bring to a boil until vegetables are tender.  Remove from heat and puree the mixture.  Return to low heat and stir in milk, half & half, brown sugar, nutmeg, cinnamon, and salt & pepper to taste.  Do not bring to a boil.

This soup makes a great appetizer or entrée.  I served it as an entrée with a salad and homemade Almost Texas Roadhouse Rolls that I’ll be sharing with you in a future post.

Although the ingredients are different, this soup reminds me of Panera’s Vegetarian Autumn Squash Soup – yum! 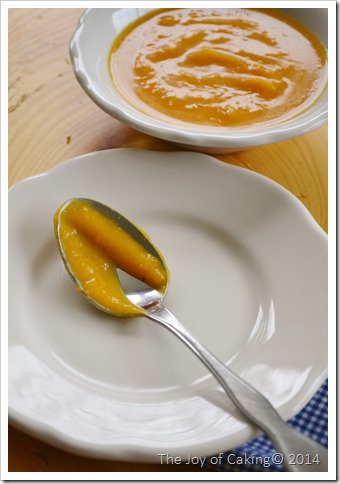 What is your favorite soup recipe?

Nights are getting relatively cooler here in the North East so there is no better time to spice things up.  Follow along…

Cut in half; scrape the seeds and ribs out of each pepper.

Fill each pepper half with cream cheese, I used light.  You can also use goat cheese.

Wrap each pepper half with a 1/2 strip of bacon.

Place in a pan lined with aluminum foil.  Bake at 350 degrees until bacon turns crispy.

(Writers note – I didn’t waste any time serving these, as you might suspect by the lack of a well taken photo of the finished gems.)

I’m all for easy when it comes to making dinner, and easy doesn’t have to mean sacrifice.  It seems like I (quite frequently) get a craving for pizza.  I prefer homemade pizza for a couple of reasons.  One, it’s fresh. Two, you know whose hands have been all over it.  And three,  it doesn’t cost you a small fortune.

The problem with making homemade pizza?  Time.  If you don’t think about it in advance, and by the time you’re hankering for it, you usually don’t want to wait for the dough.  Even a simple dough recipe takes a reasonable amount of time to prepare.

When I crave pizza and I’m not prepared, I go to my book of tricks.  That’s when the tortillas wraps come out. Tortilla pizza is  quick, easy, and deliciously good.   You can top them with any of your favorite toppings, and they also make great anytime snacks and appetizers too.  Tortillas happen to be a staple in our house, and  we usually have enough of the other ingredients on hand to throw these together without having to make a special trip to the store.

I lightly spray a baking sheet with a non-stick cooking spray and bake them at 350 degrees until the tops are golden brown. 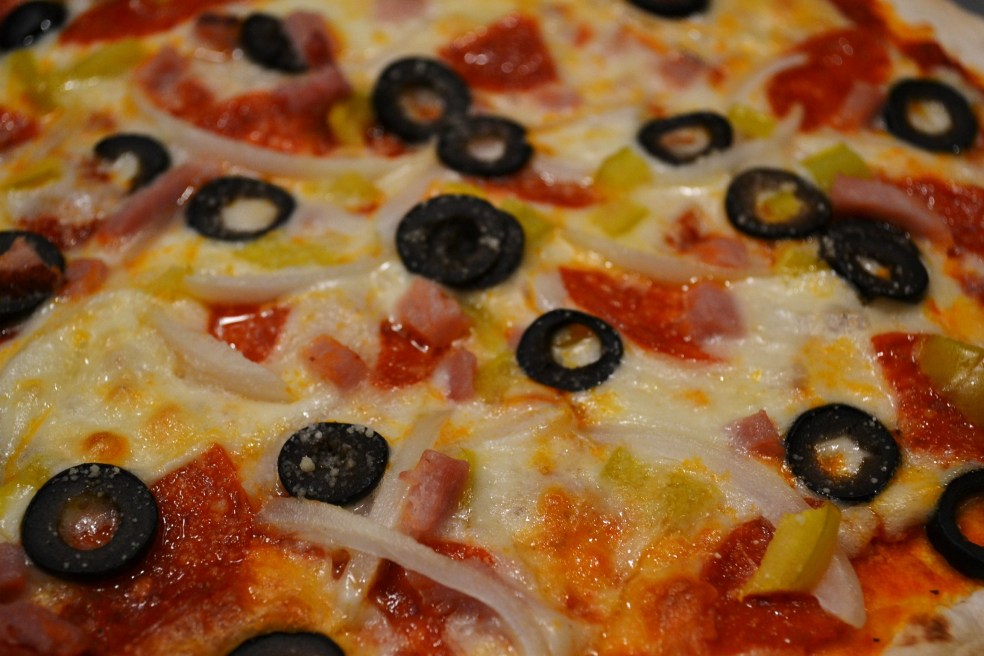 Add a fresh salad, and your good to go.  Here is a great, fairly healthy meal at a minutes notice.

These little cheddar appetizers pack a punch, and I hadn’t made them in years.  I lost the recipe, and it wasn’t until I was searching through my grandmother’s recipe box that I found it again.  I had to snicker at her little note at the top of the recipe, “good with cocktails.”

With that said, I decided it was time to make a batch.  I’m not sure where the original recipe originated from, but I can vouch they are “good with cocktails.”

The recipe is so simple that it doesn’t seem right.

Place all in mixing bowl.  Knead into a soft ball.  Divide dough in two.   On wax paper, make two logs about 1″ in diameter. Wrap in wax paper and refrigerate for about 2 hours.

Pre-heat oven to 375 degrees.  Cut into 1/4″ slices.  Bake on ungreased cookie sheet for about 12 minutes.  Immediately remove from the cookie sheet and place on a paper towel to absorb excess oil prior to serving.

*Note – the logs can be frozen prior to baking for approximately 2 months. 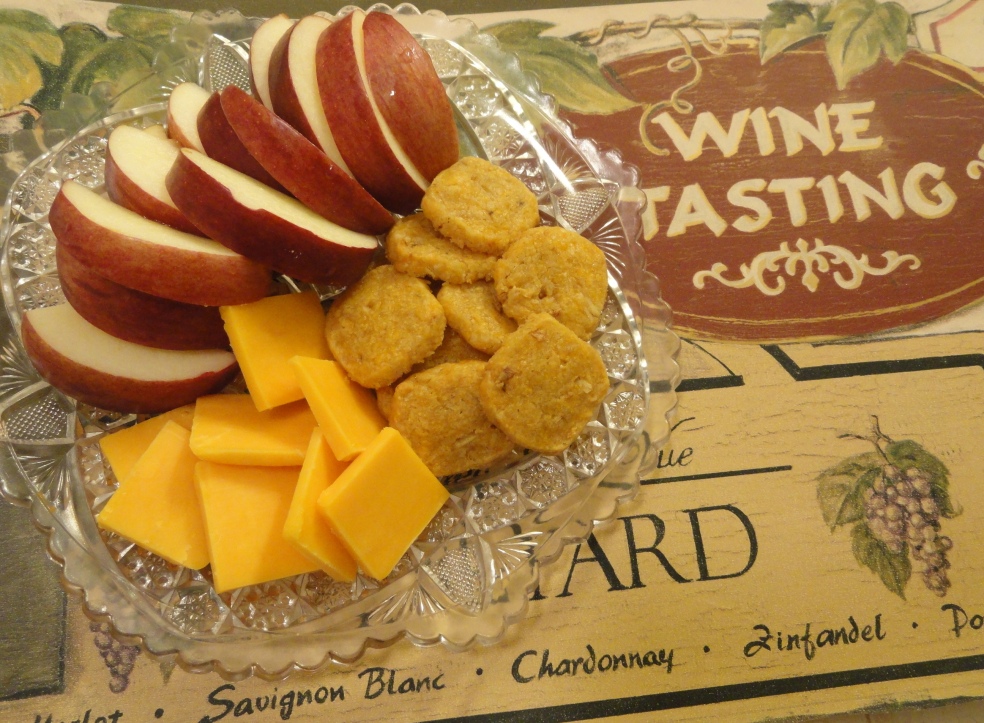 Don’t forget Project Food Blog voting starts September 20th.  You can vote for me at http://www.foodbuzz.com/project_food_blog/challenges/1

Tonight the creativity bug bit me.  I was itching to do something with the box of phyllo pastry dough I bought the other day.  I’ve never worked with phyllo dough before so this was new to me.  I have to admit I was a little intimidated at first.  I guess I had no idea it was so delicate.  The directions were intimidating, and made me feel as if I had to work quickly, yet very carefully – like handling a bomb that needed to be disarmed.

Maybe this intimidation came from confusion too.  When I bought the dough I was thinking puff pastry, but when I opened the box I realized that’s not what I got.  I didn’t really understand that puff pastry and phyllo dough are two different things, and are not really interchangeable.  Duh!

It didn’t make a huge difference to me at that point.  I was determined to make little bite sized appetizers filled with yummy things.  And, that’s just what I did.  According to the directions, your fillings should be prepared prior to taking  the pastry sheets out of the box, so I busied myself working on that first.

For  the fillings, I prepared a multitude of tasty ingredients by dicing them, and lightly sauteing  most in butter, or olive oil.  The only exception was the bacon.  I cooked that fully as you normally would.  I prepared ham, onions and green peppers, garlic, fresh diced tomatoes, black olives, pepperoni, and baby spinach. I also prepared some frozen asparagus, and chopped it into small pieces.

Once the food was pre-cooked, I did my concocting.  I made a pizza filling with  pepperoni, tomatoes, garlic, black olives, ricotta cheese, mozzarella, and Italian seasoning.  I made a spanakopita type filling with garlic, spinach, feta cheese, and a dash of nutmeg.  I mixed it up a bit with the ham and bacon.  I used the onions, green peppers, and asparagus with both, creating two different flavors, and topped them off with a little cheddar or  jarlsberg cheese (which I had already grated).  The prep time for this was time consuming, but necessary.

When working with the dough I tried to follow the directions, but it looked easier than it actually was.  I eventually decided to shape them the way I felt most comfortable.  Once filled and shaped,  I lined the little morsels on the cookie sheet and baked them until they were golden brown.  Then, I sampled…  then, hubby sampled…  then, the verdict….  A great appetizer worth the extra prep time, and the initial intimidation (which eventually passed).

Have you worked with phyllo dough?  Have any tips you’d like to share?  How about puff pastry?  What’s your take on working with that?  I’d love to hear from you!