Last week I shared a post for homemade black raspberry jelly.  We have berries are out behind our house that are free for the picking – and boy are they plentiful this year.  I think all of the rain we had this spring has helped them grow.   It’s hard for me to rationalize leaving these  berries unpicked because they are loaded with healthy antioxidants and are super delicious.  My only problem is that my stomach doesn’t tolerate seeds well so I have to be a little crafty and work around them. 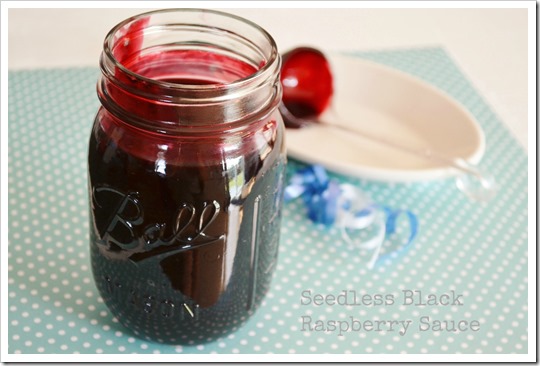 I’m not sure why I didn’t get around to making seedless preserves and sauces before now but all I can say is better late than never.

Put berries and water in a large saucepan and bring a full boil for 5 minutes over medium heat – stirring often.  Mash the berries in the pan as they soften while cooking them.  (This will yield about 2 cups of juice).

Once the berries have boiled for 5 minutes remove from heat.  Strain the juice through a doubled piece of cheese cloth and discard the seeds and pulp.

In a clean saucepan, melt the butter.  Add juice, sugar, salt, and cornstarch; bring to a boil on slow heat – stirring constantly.  Cook until liquid thickens.  Remove from the heat and stir in vanilla.  Pour into container. Makes 1 pint.  Serve warm or cool.   Store in the refrigerator (stir thoroughly before serving, or warm for a few seconds in the microwave).

Use this as a topping on ICE CREAM, MILKSHAKES, PANCAKES, or vanilla YOGURT (like pictured).  One of these days I’m going to experiment and make a homemade black raspberry vinaigrette salad dressing using this sauce and when I do, I’ll share the recipe.

Imagine how happy you’d make a friend, neighbor, or co-worker if you presented them with a small jar of this.  Think Christmas…  I have froze bags of these berries so I can make fresh batches of sauce and jam throughout the cold winter months when ripe berries are hard to come by.

Pick berries and get into the sauce!

Even if you haven’t given  4th of July  dessert a thought at this point I think you might after looking at these pictures of these simple and wickedly good ice cream cookie sandwiches.

Of course you can buy cookies from your favorite bakery to make these but they aren’t the same as using chocolate chip cookies made from scratch.

I filled these sandwiches with  Edy’s Slow Churned Ice Cream made with 1/2 the fat .  (This is not a sponsored post. )  I’m just sharing one of my favorite products with you.  My new favorite Edy’s  flavor is Mud Pie; coffee ice cream with chocolate cookie chunks and fudge swirl.  I have to admit it rocks the ice cream world. 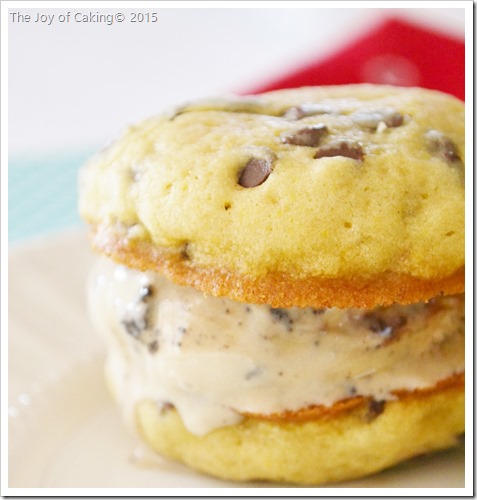 1 stick of margarine, or butter

In a large bowl cream together margarine, sugars,  egg, salt, baking soda, vanilla.  Add flour and mix completely.  Fold in mini-chocolate chips.  Drop by dining teaspoon onto cookie sheets about two inches apart.  Bake approximately 8 minutes until cookies are light golden colored and are slightly firm to the touch.  Be careful not to over bake.

Move to a cooling rack and allow to cool completely before making ice cream sandwiches. 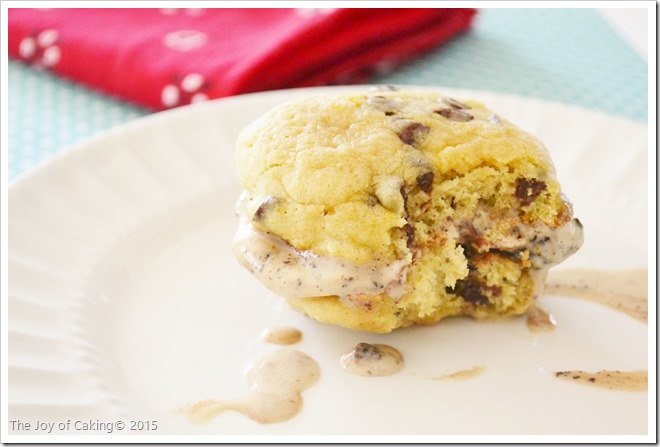 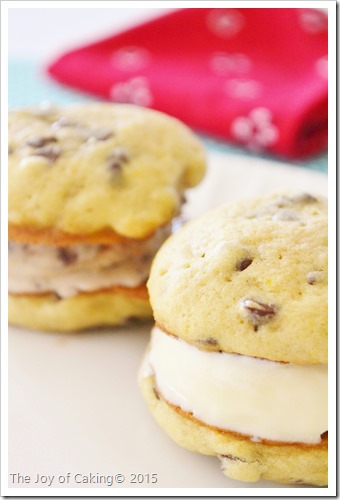 If you haven’t noticed, my blog posts are not as frequent at they use to be.  It’s not because I don’t enjoy blogging anymore, it’s just that other activities have temporarily captured my attention.  To make up for my unusual absence, I’ve decided to share my recipe for my liquid gold with you.  Calling all peanut butter lovers to the table here!

If you’re not a peanut butter lover then I apologize – but have no fear, you can always make one of these toppings instead.

And now for my liquid gold recipe!

Put all of the ingredients except the vanilla into a medium sized saucepan.  On low heat, melt all ingredients together; stirring frequently.  Bring to a slow boil until sauce starts to thicken.  Remove from heat and add vanilla.  Cool slightly before serving on ice cream.  Store in refrigerator. Makes about 1 1/4 cups.

*When you want to use topping that has been refrigerated, warm it for about 10 seconds in the microwave before putting it on your ice cream.

If you’re looking for an easy no cook, no egg, ice cream recipe then I highly recommend you give my Simply Vanilla Ice Cream Recipe a try.  It is my all-time favorite vanilla ice cream recipe.

What is your favorite ice cream topping? 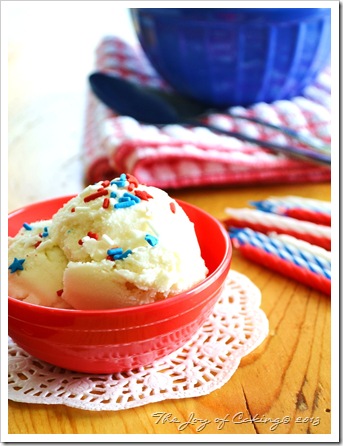 Tomorrow is Independence Day, and at this point, I have no idea how we will celebrate it.  I’m not usually a big plan in advance kind of girl.  I’d much rather act on spontaneity.  Last minute barbeques, campfires, a trip to the lake, and road trips are so much for fun when they aren’t over-thought.

Regardless of what we might decide to do on the 4th, I am sure of one thing, we will need to eat.    I’m thinking that this Bacon, Ranch, and Onion Dip will get the party started.  I’ve made this before, but it’s worth mentioning again, especially since I just made a bowl of it.

And then there are those fat slices of my Sinful Midnight Cake resting peacefully in the freezer; right next to a quart of this Simply Vanilla Ice Cream that I made.  So, I’ve got an appetizer and dessert covered.  Hey, it’s a start!

This ice cream requires no cooking or eggs.  And it’s delicious!  I found it in a booklet that came with my Crofton ice cream maker.

In a large bowl, mix milk, cream, sugar and vanilla.  Stir until sugar has dissolved.  Follow the instructions that came with your ice cream maker. 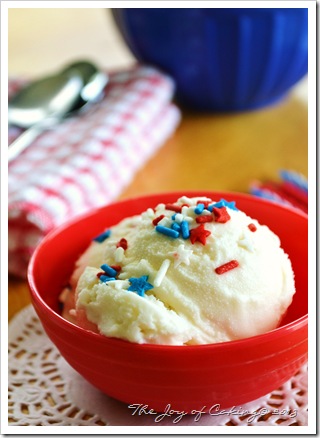 Do you have plans made to celebrate Independence Day? Or are you like me, flying by the seat of your pants? 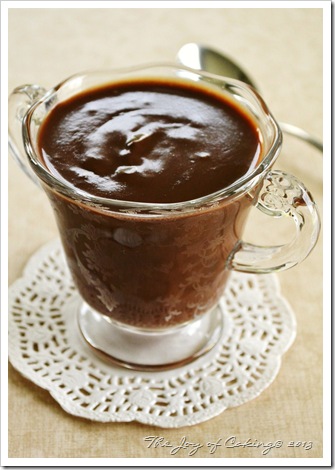 Ever make something that you can’t wait to finish so you can lick the spoon?  Me too!

Honestly, I don’t know how you couldn’t lick the spoon, your fingers, and the bowl when you’re finished making this homemade peanut butter fudge topping.  If you can resist, you’re willpower is like granite, and mine – is not.

a pinch of salt

In a saucepan, add chocolate chips, sugar, salt, and peanut butter.  Melt slowly on low heat.  Pour in cream and milk and continue to stir constantly on low heat until sauce is smooth, creamy, and thickens.  Stir in vanilla; pour into a jar.  Serve on your favorite ice cream, or refrigerate until ready to use and then rewarm in the microwave. 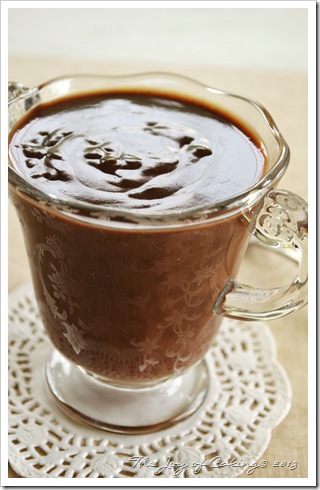 I’ve decided if I run out of ice cream I’ll just eat this topping by the spoonful!

What is your favorite ice cream topping?

I thought I’d recap this week.  Just in case you didn’t have a chance to catch one of my posts, here is what you might have missed.

A  recipe for Frozen Vanilla Peach Yogurt, and photo’s of pretty little flowers.

The start of a new baking project featuring a sourdough bread starter recipe.  And hopefully, I’ll be sharing my an update on the sourdough adventure with you this weekend.

And one of the best darned Kahlua Hot Fudge recipes that your ever going to get your hands on.

Lately, I have been pinning ice cream recipes galore on Pinterest.  My goal this summer is to make, and perfect, as many batches of homemade ice cream as humanly possible.  And do it, without gaining a single pound.  Okay, you can stop laughing now because I can see you!

I admit that when it comes to making homemade ice cream I haven’t strayed far from the beaten path.  I make a simple (no-cook) vanilla and a simple (no-cook) Strawberry Bliss, but you all know that I can’t leave well enough alone where recipes are concerned, so once again, I’ve been playing mad scientist.

I created this recipe, and made it using my ice cream machine, which by the way, I’ve come to believe is practically worthless.  The bottom freezes and the sides freeze slightly and that’s it.  You still have to freeze the ice cream for a considerable amount of time in the freezer to actually consider it ice cream.  Is that normal?  So, what am I getting at here?  I would dare say that if you make this, and pour it into a freezer safe container, and then freeze it, you will get the same results that I got using a worthless ice cream maker.

1  14 oz. can of sweetened condensed milk

Put all of the ingredients in a large bowl and mix completely using an electric mixer.  Make according to your ice cream makers instructions (hopefully yours works much better than mine).  This  recipe makes about 1 1/4 quarts of ice cream.

This yogurt is super sweet and super rich, so don’t let the word yogurt trick you into believing it is a whole lot healthier for you.  Using the sweetened condensed milk knocks that theory right out the window.  I found the peach flavor in this batch to be more subtle than I had expected.  That’s because the vanilla and cinnamon are vying to be the winning flavors – which they succeeded quite well at.  I’ve decided when I make this again I’m going to tone down the vanilla and cinnamon just a little, and I’m going to add baked pie crust to the next batch because the flavor reminds me of a homemade peach pie.  And who will be able to resist frozen peach pie yogurt?

Are you ready for a season of homemade ice cream and frozen yogurt recipes?